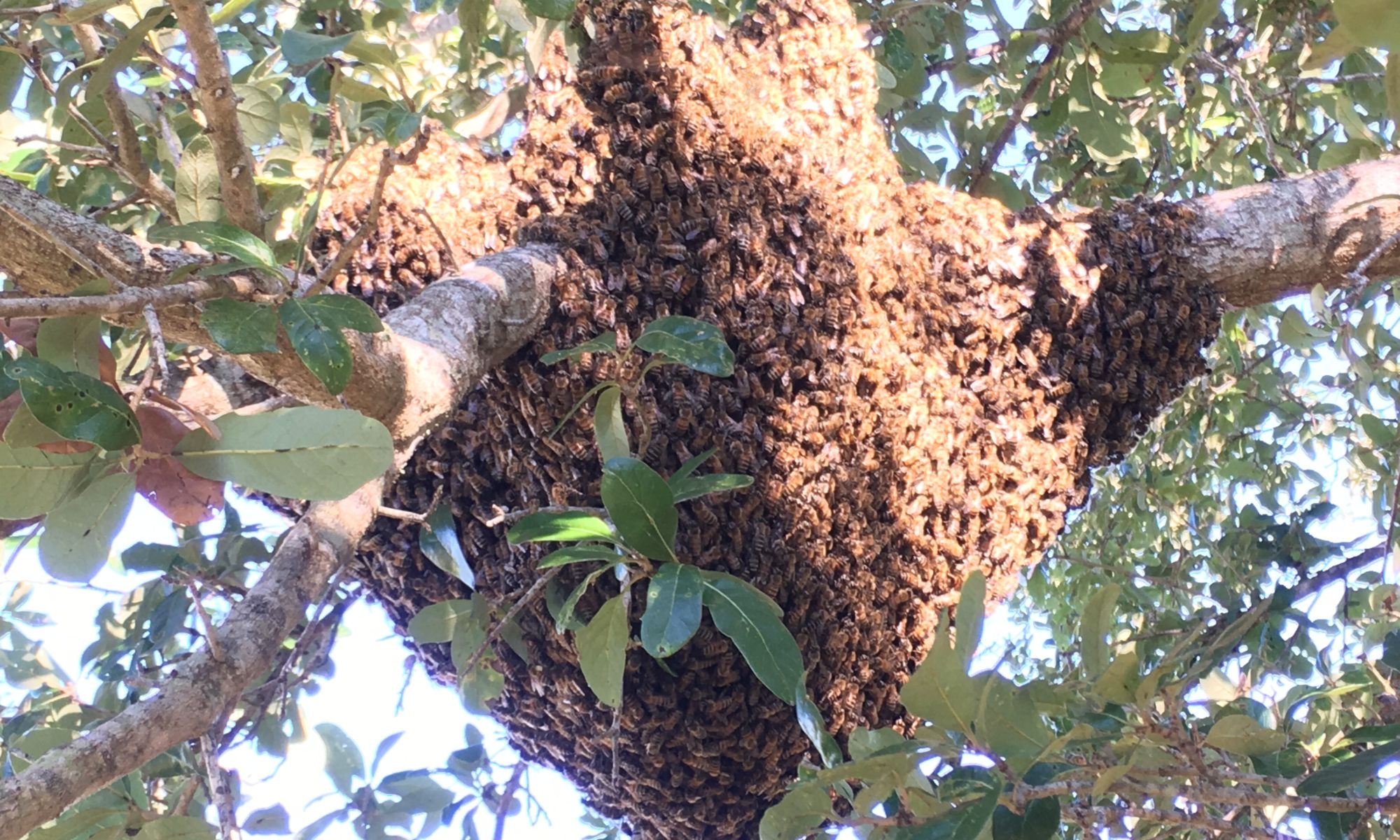 Looking for Bee Removal in Cape Coral or Punta Gorda?

Have Bees in your backyard tree or palm?

Or perhaps clinging to your home’s exterior wall?

We provide safe and humane bee removal and swarm relocation services. Services may be limited by location as well as access.

The Swarming of the Honey Bees

Swarming is a natural behavior for colony reproduction.

Bees tend to swarm when there is a strong nectar flow (lots of flowers blooming).

Beekeepers refer to this time of year as “swarm season”.

Typically, the location the colony was established in previously has become too crowded as the queen lays more and more eggs to collect all the nectar and pollen to store for their winter survival. 50-60% of the bees leave with the queen mother and leave the queen daughter behind with the remaining colony.

Here in SouthWest Florida “swarm season” tends to start in early to mid-March when the first flowers on the Palms, Palmettos, Mangroves, and Citrus have been blooming for a few weeks.

Swarm season tends to continue through late June to mid-July until the intolerable heat and soggy grounds give us very few flowers for the bees to gather nectar and pollen from.

We have a second “swarm season” when the Brazilian Pepper blooms that can start as early as mid-September and go as late as mid-November.

And all that being said, if we have a warm winter, “swarm season” can also start in December…it’s not like anyone told the bees that it’s not officially “swarm season” yet 🙂

During swarm season is when most homeowners discover that bees have moved onto their property as uninvited guests.

This is also when beekeepers are very busy managing their own colonies to keep them from swarming as well as with bee removals and relocations.

Swarms are temporary locations where bees gather after splitting off from the established colony. The bees that leave will cluster in a tree or on a wall to protect their queen.

They send out scout bees to find the next suitable forever home for the colony. Generally, they do not stay in these types of locations for more than a couple hours to at most a couple days.

Typically, they leave within a couple hours. However, often homeowners mistake established colonies with wax comb for swarms.

This is simply because they didn’t notice the bees arrive and assume they just got there when they first realize they are there.

Beekeepers love collecting swarms since they tend to be more docile and don’t have to take a building or wax comb apart to collect the bees and they tend to be in less restrictive areas.

That having been said they can also be the most challenging to collect since they often leave as soon as you have your suit on and are heading up the ladder.  We do collect swarms and try to relocate them to our farm whenever possible.

What is a Cut Out

Cut Outs are when bees have established colonies with wax honeycomb and are in an area that is readily accessible to remove the bees and the wax.

These types of bee removal and relocations involve “cutting out” the existing wax comb with the honey, pollen and brood (eggs, larvae and pupae) and making sure all the wax is removed.

If the wax is not properly removed, then the next scout bees will smell it and use it to set up their colony.

When people haves bees with the honey comb improperly removed, they often get bees again in exactly the same place.

This is just one more reason to be sure to hire an experienced beekeeper to complete your bee removal.

How is a Cut out done?

There are several ways this can be done properly.

We usually can do bee removal cut outs depending on the colonies location assuming there does not need to be extensive demolition to get to the bees.

Never plug a hole that bees are coming out of without removing the bees first.

The bees are resourceful and will chew another way out — it just might be into the home instead of the outside!

Some examples of Bee Removal – Cape Coral – Cut Outs would be:

What is a Trap Out?

Trap Outs are when bees have established colonies with wax honeycomb and are in an area that is not accessible to remove the bees and the wax without extensive demolition and reconstruction.

These types of bee removal and relocations involve “trapping out” the bees by using a wire mesh one-way cone. As the foragers head out, they return and are unable to get back in to rejoin their colony.

How is a Trap Out done?

The beekeeper must seal off all the entrances and usually will place a new bee hive box near the one way mesh cone to allow the bees a place to establish a new home.

This is a time intensive process since the beekeeper must come back for several weeks to manage the bees in new hive box to make sure they have the resources to survive, check that the bees have not found another way in, and keep doing this until all the bees have come out of their inaccessible location.

This bee removal process can take 6-8 weeks from start to finish.

We will seal off the area the bees got in from once the trap out is completed.

We do not kill bees. If you opt for the pest control option, you will need to contact a licensed pest professional.

Often this is when some folks will call the pest control professionals since it may be too costly to repair the structure to do a cut out, or takes too long due to public safety concerns.

We do not judge and will let you know what your honest options are. A trap out does not involve an demolition nor reconstruction.

Never plug a hole that bees are coming out of without removing the bees first.

The bees are resourceful and will chew another way out — it just might be into the home instead of the outside!

Some example of Bee Removal – Cape Coral – Traps Outs would be: